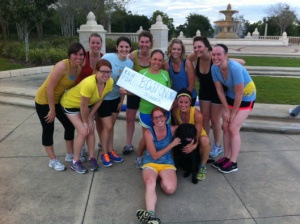 Last week the world went a little crazy for a while.  The week began with one of my all time favorite authors, Brennan Manning, passing away.  I’ll probably post more on this later because I really think he was one of the last true prophets left on this Earth and his passing has made me eternally grateful for his life and written words.

Then, on Monday the unthinkable happened, two bombs went off at the finish line of the Boston Marathon.  Boot camp actually met that night.  Jordan was out of town, celebrating her first wedding anniversary, but a handful of us met down at the park and struggled thru the hot, intense session.  And because the bombings had just happened, and no one really knew what had really happened at the time, we didn’t really even talk about it.  But I know it was on my mind as I sweat thru the push-ups and the jumps and those blasted freakin’ bear crawls, and I am sure it was on everyone else’s minds as well.

On Wednesday, as we prepared to meet that night, Jordan sent out an email letting us know of a nation wide event being put together called 4.17: Run For Boston.  She suggested we all dedicate our laps around the track to the runners of the marathon and participate in the mile run that athletes across the country were planning.  So, rather than running a lap around the track after each set, we ran 4 laps around the track at the end of our workout.  And this workout was hard.  It was so so so very hot and humid and the workout was brutal as always.  Even without the laps in between, we were all dead tired when we hit the track at the end for our mile run.  I know, personally, running a mile was the last thing I wanted to do but we all started chugging our way around the track.

So many thoughts crossed my mind as I ran.  The first being a reminder of how much I legitimately hate running. Really, its awful.  Serious runners have both my respect and my puzzlement as to why you would choose to pound your body like that.  But then I started thinking about how appropriate it was to the situation that we were all so bone tired.  This mile was to signify the last mile that many runners in the Boston Marathon never got to finish.  The runners who had yet to cross the finish line when the bombs went off were stopped about 1 mile from the finish line and were, understandably, not allowed to finish.  These runners had trained for months for this race and, to top it all off, the Boston Marathon is a qualifying race, meaning you have to have a record of finishing a marathon in a certain amount of time in order to even be allowed to race.  So for these serious runners to have trained for so long and so hard and then to be stopped one mile from their personal victories must have been devastating.  But then, I started thinking as I pounded that track, then they find out why they can’t finish.  They hear of the explosions and fear strikes their hearts for all of their friends and family who were standing at the finish line waiting to cheer them on.  And I am sure, that suddenly finishing the race takes on a new importance for them.  As I head into lap two I start thinking about how much that one mile now means to those runners.  A new sense of urgency hits them as that single mile separates them from people they love now being right smack in the middle of a disaster.  A lot can happen in the distance of one mile.

That one mile carried more significance to those runners than the entire other 25.2 miles combined.  And so, as I rounded my last lap around the track, I prayed for those runners who had the misfortune of crossing the finish line as the bombs went off.  I prayed for the runners who were held up at mile 25 and now forever  emotionally impacted by that one last mile.  And with a stitch in my side and a cramp in my leg, I finished the mile for them, alongside my other boot campers.  And as cheesy as it may sound, as we all finished and stood along the track to cheer everyone else on as they finished, I thought to myself, “Evil will never really win.  Races will continue on and finish lines will continue to be places of victory and celebration.  No amount of evil can stand up to the victory that will ultimately always be found.  Good will always prevail!”

And as week 7 of our boot camp came to a close, the bombers had been found and peace had begun to return to the city of Boston.  And our boot camp made one more step to our final finish line together.